The Citrix Universal Printer Driver (UPD) is a device-independent print driver, which is compatible with most printers. As a workaround, use the Citrix Group Policy PowerShell Provider to edit this setting. Solution. Perform the following steps to resolve the. Microsoft's less-compatible version of PDF) - In the XPS print path, available as of Windows. Vista, Windows 7 and upwards, printer drivers are based on the. POLYMAIL DEELETE ACCOUNT 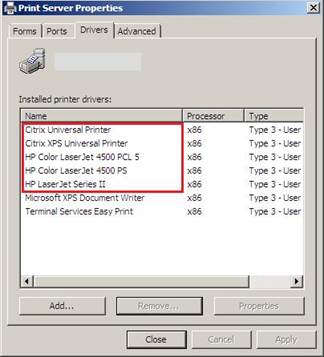 Was this page helpful? Thank you! Sorry to hear that. Name Name is required. Email Email address is required. Close Submit. Featured Products. Need more help? Product issues. Open or view cases Chat live. Other support options. XPS got introduced with the release of Windows Vista and Server and is supported in later versions, like Windows 7,8 10 and Server , The way an application is written, coded, or compiled, etc.

Win32 GDI applications, meaning that they are based on a C-based framework for creating applications, depend on and leverage the EMF print file format and rely on the Graphics Device Interface as you will find out shortly. WPF applications Windows Presentation Foundation however, represents a graphical subsystem a more modern graphics format for rendering user interfaces in Windows-based applications and uses the XPS print file format.

The same applies to Win32 XPS applications. XPS applies compression by zipping the print data into a. EMF does not use compression at all. XPS, however, can reference a single image multiple times. All in all, XPS is better suited for handling graphic rich documents.

As highlighted above, when dealing with an XPS based application, and thus print output, the data travels directly from the application to the local or remote print spooler service, bypassing the GDI on to the print device for rendering and output, without any interruptions. During this phase, it will also determine if the target printer is locally attached or remote through a print server before sending it over to the actual physical print device — a distinct difference between the two, EMF and XPS.

Therefore, documents that are outlined in the XPS spool file can be rendered natively in WPF without data or fidelity loss because no conversion is necessary. Of course, this is still somewhat high-level, but it does give you a good indication of what is taking place under the hood. Local and remote print spooling. When, from a client perspective, print spooling takes place locally, local compute resources will be consumed CPU and memory.

When spooling takes place remotely, not only will remote compute resources of the print server be used, it will also generate a certain amount of network traffic between the client which can be a XenApp server and the print server with every individual print job.

Both need to be taken into consideration when sizing your print architecture set-up. Unlike remote spooling, local spooling does not use any network resources. Even in a non-Citrix environment, if a WAN has substantial latency, users will have a poor user experience if the print jobs are spooled remotely across the WAN.

However, in some situations, for example when the resources on the local computer are needed for other tasks, remote spooling is preferable. In remote spooling, the print job is processed on the print server, which offloads processing from the local computer. They were are not optimized for multi-user environments; not tested or signed; services would hang spooler and Citrix Print Manager ; blue screens would pop up; the auto-creating of printers would fail; we would experience high CPU loads; and so on.

Back in the Windows NT days, all we had were version 2 kernel-mode drivers. You would simply lose the whole system and everything on it. Luckily with Windows came version 3 user mode drivers, which are still widely used today. Version three print drivers run in user mode, so if something were to go wrong with one of these drivers, it would not affect the system kernel.

Although in some cases this can still leave the server useless, the impact is less than with kernel-mode drivers. With Windows Server R2 Microsoft introduced a mechanism, which automatically blocks the installation of version 2 kernel-mode drivers: a good thing. They also added a feature named Print Driver Isolation, and it can do exactly as the name implies: isolate your print drivers.

With the None mode which will be applied by default nothing changes, all drivers will still be able to interact, and if one goes bad, it can still potentially bring down the whole machine, or the biggest part of it anyway. With Shared mode, however, we can group a certain number of print drivers and let them run in a process completely separated from all other print drivers including the Print Spooler and CTX Print Management Service.

The same rules apply to the Isolated mode, only here the isolation part will get used on a per print driver basis. FMA fact : Perhaps you are better off using None and Shared mode in production and use Isolated for troubleshooting purposes only, which of course could apply to production as well, only temporarily. Version 4 printer drivers. As of Windows Server , we also have version 4 mode drivers, which are user-based print drivers and can also be isolated.

All of the above applies here as well. They are designed to handle the more modern Metro-style applications and are based on the XPS print file format exclusively. They are supposed to support a larger number of different printer types; they are more stable, support enhanced printer sharing and should be a lot easier to install and maintain. Citrix Print Management Service. The Print Management Service was first introduced in , which was around the same time as the EMF-based universal print driver.

It has multiple responsibilities, capabilities and handles a few different tasks regarding the CTX print process. For one it directly communicates with the Print Spooler service, as you can see in the image below.

It can communicate with the locally installed ICA Client when needed when the client printing pathway is used, which will be explained as well and compresses data before it is sent over the ICA channel. Well, to be honest, not that much has changed. We still have to deal with delayed logons and printing, services that crash, blue screens, CPU spikes, auto-creation failures, and more.

And if we can relate these types of issues back to Citrix printing since there can be dozens of reasons why all this may happen then in most cases it is still because of faulty print drivers and poorly designed print architecture set-ups. A printing pathway defines how print traffic can or will be routed throughout your environment. It also tells us where a job gets processed, spooled and so on.

Depending on the types of end points we use, the way we provision printers, including the physical set-up of our XenApp and print servers and physical print devices, we can partly influence how print traffic will be routed, and use it to our advantage. From a client perspective, when a document is printed, spooling will take place locally on the XenApp server, leveraging local resources, before sending the output to the print device.

By default, there is no print server involved. The client part refers to print traffic generated on the Citrix XenApp server being redirected back to the client device from where it will be forwarded to the physical printer. This is what happens… A user will have a session on the Citrix XenApp server. Remember the Citrix Print Management Service mentioned earlier, this is where it comes into play. This is very useful, especially when the client device and the XenApp server are physically separated from each other.

And since those three, the client, the print server, and the physical print device are all close together, this will be a much more efficient approach, as you can see in the overview below as well. And there always is. When the print server is back in the data center, as mentioned and shown in one of my previous examples, this set-up, using the client printing pathway I mean, will only make things worse.

Have a look at the image below. Imagine you have a session on the Citrix XenApp server. From there it needs to find its way over to the print server, and since it is located back in the data center: it will again need to traverse the WAN. Even more importantly, it will do so in an uncompressed state. Finally, when rendered, the print job needs to be sent to the physical print device back in the branch office.

Again, generating uncompressed traffic over the line. You can see the inefficiency, right?