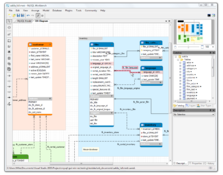 Bug When using the Generate Catalog Diff Report wizard, the Stored Connection information was not automatically populated when a previously defined Stored Connection was selected. Adding Insert records for a table worked correctly. However, there was no way to remove the records once the Open Editor facility has been used to add them.

When defining a primary key with a user-defined data type, it was not possible to set the auto-increment AI attribute. Clicking the AI check box had no effect. To circumvent this problem it was possible to temporarily change the data type of the column to a built-in data type such as INT , set the AI attribute and then change the data type back to the desired user-defined data type. The model could then be saved. MySQL Workbench did not limit foreign key name length. Foreign key names must be unique.

Synchronization of the model with an external database failed to report errors. This meant there was the possibility of an incomplete synchronization, without the developer being informed. If a relationship was right-clicked in the EER diagram, Edit Relationship selected, and then the Relationship tab selected, the visibility radio buttons were displayed. However, if the visibility settings were changed there was no effect.

On the Linux version of MySQL Workbench it was not possible to rename a layer by double-clicking it in the Layers window which is typically docked to the right hand side of the screen. This can be activated by double-clicking the layer's title. It was not possible to rename a table created using Add Table , by copying text into its text field. Using the Foreign Keys tab of the Table Editor , it was not possible to correctly create multiple foreign key relationships. MySQL Workbench now includes the ability to manually resize the table, besides automatically limiting the number of columns to a user selectable value, by order of appearance, regardless of being key columns or not.

Selecting Show Column Flags had no effect at all, and the flags were never displayed. When in the Columns tab of the Table Editor , if an attempt was made to change a column data type to INTEGER n this would have no effect and the column data type would remain unchanged. However, if INT n was entered this was accepted and the data type changed accordingly.

When a new index was created in the Indexes tab for a table that already had indexes, the previously displayed index field remained selected. This caused concern that the newly created index would be on the wrong field. Only the mouse could be used to select and copy the text. When Workbench:copyToClipboard was used from within a plugin, only garbage characters were copied to the Windows clipboard.

This affected the operation of plugins. On OS X, an application window's red close button should contain a solid circle if the current document is unsaved. Although the circle was initially shown, it was not displayed after subsequent edits to the model. The origin of the diagram seemed to have no bearing on whether the crash occurred because it happened both with diagrams created from reverse engineering and those created independently. When Cancel was clicked, MySQL Workbench exited without saving, rather than returning to the application without making any changes.

This only happened when clicking the main application Close button, in the upper right corner. It did not happen if the application was exited by selecting File , Exit from the main menu. If the order of columns was changed in the Columns tab, this was not reflected in the EER diagram.

Any generated SQL script therefore contained errors, and would subsequently fail. Version 5. The new setting can be found by selecting Tools , Preferences from the main menu, and then selecting the Diagram tab. The settings are then available in the Tables panel.

When an attempt was made to add a new table to a schema page other than the default MySQL Model page, this error was generated:. This occurred after the objects to export were selected, it did not matter if one or all objects were selected.

The data type ENUM did not accept parenthesis in its values. In the Columns tab of the Table Editor, when a column was right-clicked to display the context-sensitive menu, the Move Up and Move Down menu items were disabled. This meant that the order of the columns could not be changed in the normal manner. Right-clicking in a blank area of the User Types window generated an exception:.

When attempting to enter trigger code into the Triggers tab of the Table Editor, a timer appeared to periodically fire, which caused the delimiter to be added while typing. However, after an output script file was set the location opened by the Browse button returned to the default, rather than remembering the last location accessed. This required navigating to the correct location each time the script was regenerated.

The icons for columns displayed in the table editor did not match those displayed in the EER Diagram. All insert statements were generated, including those for tables that had been excluded in the export filters.

In the EER Diagram, right-clicking to edit a table sometimes failed with the following error:. When a table was renamed, inserts that had been created for it disappeared. Further, when a table was updated in Physical Schemata or in the Catalog pane, inserts were not updated. If font size was changed in the Appearance tab of the Workbench Preferences dialog, this had no immediate effect on the visual appearance of the EER Diagram.

When zooming an EER Diagram, the text in a table would sometimes extend beyond the edge of the table box.

Idea brilliant ultravnc 3 monitors you were

Can winscp checkpoint have